Thank you for giving hope with love to people like Krishna this year! 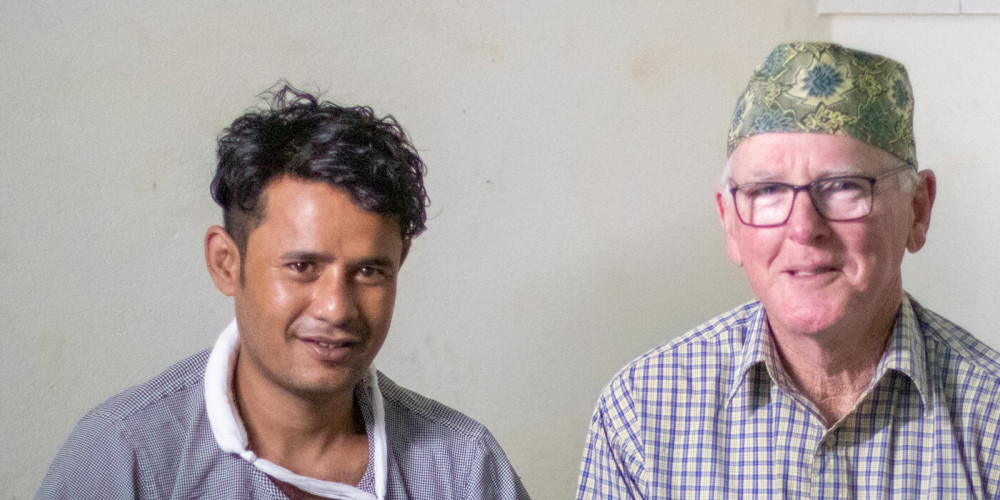 By Colin Martin, TLMA Board Member

The impact of leprosy on an individual and on their family is hard to explain to someone who has not seen it first-hand.
Over the last twelve years, as an annual visitor to The Leprosy Mission’s Anandaban Hospital in Nepal, I have met many people whose lives have been completely disrupted by their diagnosis with leprosy. Last year I met Krishna, who was waiting for reconstructive surgery on his hand.

We all know that leprosy is now 100% curable but not everyone comes for treatment before they have developed complications of the disease. Sometimes this is due to a delayed diagnosis, sometimes to fear of being stigmatised and sometimes it is just how the disease behaves in an individual (a condition called “reaction”).

Krishna worked as a driver but noticed that his hands were becoming numb and that he couldn’t grip the steering wheel properly. It took 14 months before he received a correct diagnosis and over that time his weakness and claw hand became worse.

Krishna is an intelligent, charismatic young man with an amazing smile but he found himself unemployed. He is the carer for his school aged younger sister and was troubled about the implications for her future. He felt deep sadness and then anger at the unfairness of what had happened to him.

When Krishna arrived at Anandaban Hospital, he was given hope as the necessary surgery was explained to him. He was treated with care and respect and even love.

Reconstructive surgery with tendon transfers from functioning muscles in the forearm, to replace the function of muscles in the hand, which no longer work due to nerve damage, is just absolutely amazing.

Krishna’s hand which had been mildly clawed and unable to grip was given back its function. The hand will still be numb and the grip weaker than it used to be but he will be able to grip the steering wheel of a car and to pick up and manipulate the small things that we all handle every day. Actions which we all take for granted.

A few days after the surgery, Krishna could see a positive future again. His amazing smile, which lights up his face, was back.

He said, “I hope to go back to my previous  job and to earn enough money so that I can look after my sister”.

This is not a vain hope or wishful thinking. Despite the issues Krishna had experienced with his hand, his fingers were not deformed and post-operatively, looked normal enough that only a close observer might notice anything unusual.

Without surgery it would have progressed into a useless deformed claw hand. He will fit back into the community.

Krishna is one of hundreds of people I have met and whose surgery I have been privileged to be involved with. The only thing limiting how many lives we can improve, is the funding needed to do the work. Having retired from medical practice, I have become involved with TLM in different ways, but my passion for improving the lives of people affected by leprosy has not diminished.

The help of amazing people like you, who pray for our work and who donate towards leprosy treatment and reconstructive surgery has an impact which you can only start to imagine. I thank you for your compassion and commitment to people affected by leprosy and disability. It is inspiring and truly, truly life changing.

Please pray for people affected by leprosy like Krishna who need surgery. Pray function is fully restored. Give thanks to God for the amazing work of Leprosy Mission surgeons around the world. Give thanks for the Australian supporters upholding them in prayer. God bless you this Christmas and New Year.

Thank you for helping put the “PEP” in communities affected by leprosy in Indonesia!

World Disability Day: A Better World For All