Hussaini’s healing hands are helping his community – thanks to people like you! 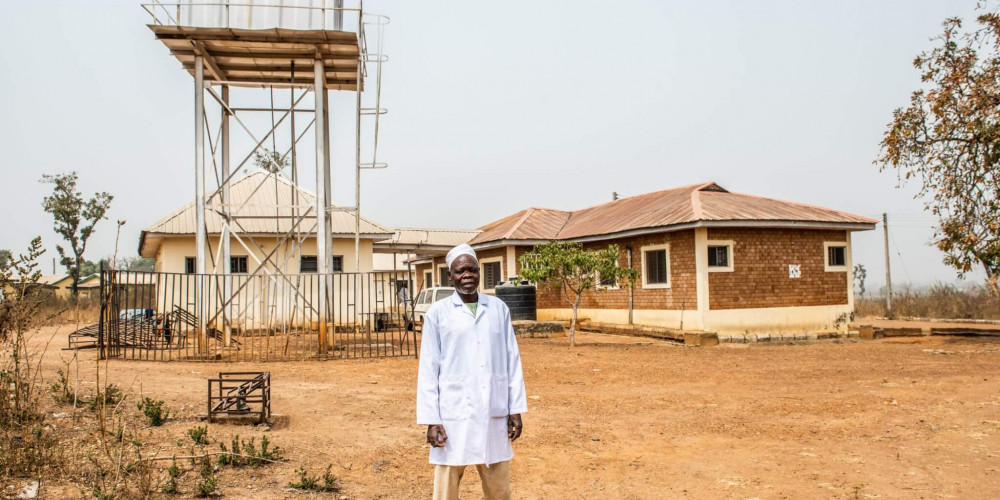 Hussaini is 68 years old and is still working at a medical clinic in Nigeria. Its no ordinary clinic and he is no ordinary man – he has had leprosy all his life. The fact that he can still work and spend time helping others is due to people like you who care and provide support for the work of The Leprosy Mission. Thank you.

Hussaini’s parents noticed that Hussaini had a skin patch when he was just a one year old. His parents knew it was leprosy and so they took him to a traditional herbal healer who told him not to eat goat, eggs, or fish. Of course, this advice didn’t help and by the time Hussaini was 7, his leprosy had become worse. His parents changed their approach and took him to a clinic. This was before the days of multi-drug therapy (MDT) and the drugs he was given there did not work. He continued to suffer from bad ulcers on his left foot, painful nerve damage in his arms, clawed hands and swelling due to his body’s reaction to the leprosy bacterium. It was not until years later, when Hussaini was in his 30s, that he was given (the then) newly developed Multi-Drug Therapy, which he took for two years.

As in many of these cases, people with leprosy are not only given drugs but if they present with wounds or ulcers, they are introduced to self-care groups so they can manage their own wound care. In this case, The Leprosy Mission Nigeria staff not only trained Hussaini how to treat ulcers but also gave him a job and have taught him how to help the people in his community. Hussaini is now very happy living in a leprosy settlement and enjoying the respect and dignity he has in his senior position there.
Hussaini still has some clawing in his hands but manages to dress and treat ulcers three days a week in the clinic’s self-help group. He uses bandages and other items provided free of charge to the clinic by The Leprosy Mission Nigeria. Thanks to the support of people like you. Thank you!

But sadly, the story of leprosy in Nigeria continues… right now, things are critical for the clinics, government health teams and projects addressing leprosy. The Leprosy Mission Australia has a project in the Zamfara region that is supported by you and the Australian Government through their NGO grant program.

The reason things are critical is that the production of the drugs for Multi-Drug Therapy (MDT) has been compromised. COVID factors in other countries have affected both the quality and quantity of these drugs. The result is that Nigeria has gone for months without supplies. This means that courses of the medication that take either 6 months or one year cannot be completed by patients in Nigeria, leading to severe leprosy reaction.

These reactions are often more painful and disfiguring than the initial leprosy.

This will exacerbate the discrimination and stigma faced by leprosy patients and has the potential to destroy trust in health services which means that community members will not present themselves for diagnosis or treatment. This will in turn undermine the ability of health services to defeat leprosy.

There is no easy solution to this but it requires support the World Health Organisation (WHO) as it seeks to coordinate the global players like the International Federation of Anti-Leprosy Associations (ILEP), Global Partnership for Zero Leprosy and Novartis, the global pharmaceutical company that produces the leprosy drugs.

Please pray that this supply issue may be resolved quickly so that MDT medications can reach the leprosy patients in Nigeria that so desperately need it to be cured.

Healed and cured after five years of pain – thank you!