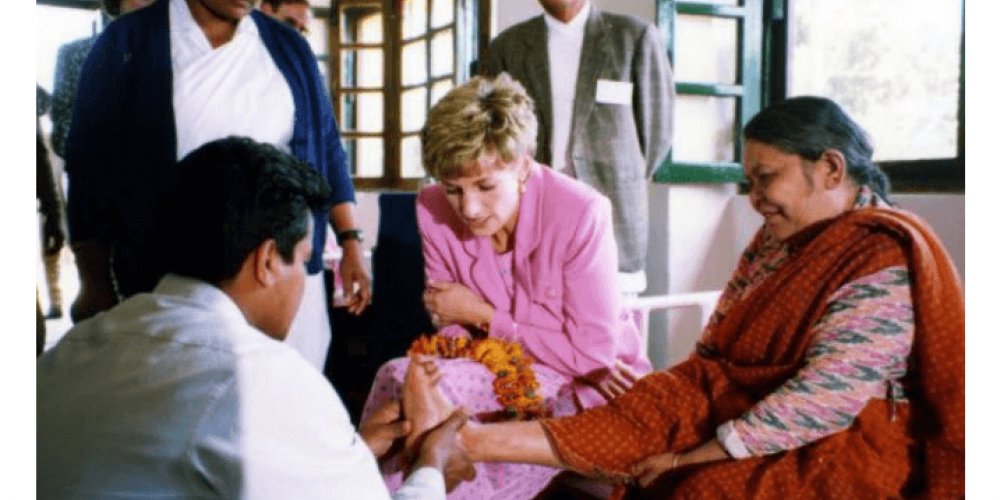 It is hard to believe it has been 24 years, this month, since the tragic and untimely death of the much beloved Princess Diana of Wales. Had she been alive today, she would have just celebrated her 60th birthday. The ‘people’ s princess’ touched the hearts of many across the world…including people affected by leprosy.

Janet Walmsley was working in the UK for The Leprosy Mission during the time of Diana’s patronage.  She invites us to remember what tender-hearted influencers can do for the hope of individuals and the inspiration of nations. Perhaps you will be inspired too…

In 1989 Diana, Princess of Wales visited a Leprosy Mission Hospital in Indonesia against the advice of officials and the press. She was filmed sitting with leprosy patients, talking to them and – most controversially – touching them. A year later Diana became a patron of The Leprosy Mission (TLM), and in the following years she visited projects in India, Nepal and Zimbabwe.

When Diana visited The Leprosy Mission’s work at Anandaban Hospital in Kathmandu, Nepal in 1993, she sat on the patients’ beds, holding their hands and talking to them. When the pictures were broadcast around the globe, they absolutely shocked the world.  It was against everyone’s advice, against protocol – to touch a person with leprosy.

Her visits at that time provided invaluable publicity for the work of TLM – giving a clear message that leprosy was not a disease from Bible times, something eradicated a long time ago, nor were leprosy patients “untouchables” – to be feared and outcast from society.

Ruth, a British worker with The Leprosy Mission in Nepal who had been there when Diana visited the Anandaban Hospital, shared with me some years later:

“There were two quite beautiful effects from Diana’s visit. One was on the patients, who were overwhelmed by her kindness – the way she sat on their beds, held their hands and talked to them. It was absolutely huge to hold a leprosy patient’s hands at that time!

“The other effect was on the people who worked with leprosy patients. A colleague in PNG told me they received copies of that broadcast from Nepal and showed the health workers – it really challenged their attitudes. They realised that if the Princess could come that close to patients and not feel afraid or repulsed, then they had to think about their attitude to people with leprosy as well. It was very powerful.”

Stigma is still a major issue in dealing with leprosy, but attitudes are gradually changing and Diana’s legacy has played and continues to play a part in that change of attitude. After her death in 1997, a grant from the Diana Princess of Wales Memorial Fund established the Diana Princess of Wales Health Education and Media Centre in Noida, near New Delhi, India. Its purpose is to advocate for and promote the rights and inclusion of people affected by leprosy, and other disabling diseases, in Indian society. It releases broadcasts that aim to change public attitudes and perceptions, and encourage people to seek help if they develop symptoms.

I was once asked by a journalist, “Why do you think Diana chose to be a patron of The Leprosy Mission? It was, after all one of only six charities that she kept on after being stripped of her HRH title”

At that time I replied, “I think she really did like to support marginalised causes that weren’t so popular. Leprosy is a heartbreaking disease. It must have touched something deeply in her”.

At this time of commemorating Diana’s 60th birthday, when her sons are reuniting for the first time since the Duke of Edinburgh’s funeral, we recall the profound difference Diana made in the lives of so many marginalised and afflicted with this heartbreaking disease.

The Leprosy Mission internationally remembers and honours Diana for the compassion she showed to people suffering from the devastating effects of leprosy, and is grateful for her ongoing legacy through the advocacy work of the Diana Princess of Wales Health Education and Media Centre in India.

May we consider prayerfully, as ‘children of The King’, how we reach out compassionately to people affected by leprosy and disability, in today’s world and into the years to come.

Please keep praying for a vaccine for leprosy.