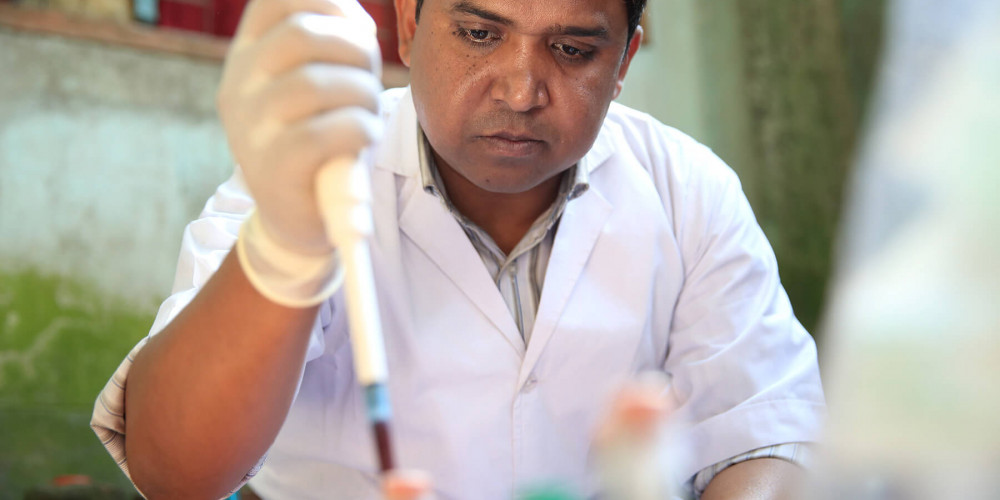 Within just 24-hours of treatment with Multi-Drug Therapy, leprosy is no longer contagious. So current strategies focus on diagnosing and treating people as soon as possible. This intervention interrupts the spread of leprosy so less people will ultimately contract it. It also prevents people from developing permanent impairments.

Still, this strategy has some difficulties. Early detection can be hard in remote places or when people affected by leprosy and stigmatisation avoid health workers. Unusual or unnoticeable symptoms can often delay diagnosis. Treatment can be difficult when there’s little medication or when the patients have a poor understanding of health issues.

A better option would be to stop the transfer of leprosy altogether!

A vaccine could do this by building immunity to the bacteria. Like most vaccines, the leprosy vaccine would contain a live, weakened version of the bacteria M.leprae or M.lepromatosis. This weak version wouldn’t result in leprosy developing, but it would stimulate the immune system to mount an attack on the bacteria. When exposed to the full-strength bacteria, the body could successfully mount the attack again. With no time for the bacteria to get a proper hold, it wouldn’t be able to spread to anyone.

A leprosy vaccine has been a priority of laboratory research and world health organisations for the last twenty years. At the moment there isn’t a specific vaccine for leprosy. There is a vaccine against tuberculosis, called the BCG (Bacillus Calmette-Guérin) vaccine. This vaccine can offer some protection against leprosy. This is because the organism that causes leprosy is like the one that causes tuberculosis. But the BCG vaccine isn’t enough to protect against leprosy. Researchers are still developing a vaccine that will protect people from the leprosy bacteria. There has also been some experimentation with a chemoprophylaxis (a medicine that offers patients some improved immunity) in recent years. A combination of three drugs (not unlike MDT) was administered to whole populations on some small islands. Unfortunately it has only had a very temporary impact on lowering incidences of leprosy. Researchers are still investigating, but it does look like it won’t match the optimism it orginally inspired.

Like Multi-Drug Therapy before it, a vaccine would be a radical step towards defeating leprosy.

But there’s still a long way to go just yet. A vaccine tomorrow won’t help those affected by leprosy today. In the past, over-optimistic hopes and promises have diverted funding, talent and human resources away from leprosy. So in the meantime, it’s essential that we focus our immediate attentions on some of the difficulties facing early diagnosis and treatment. Health workers need continual training and resourcing to find leprosy as early as possible.

110 years of service in Thailand, thanks to your support

Just words? Affirming people’s dignity in everything we say.