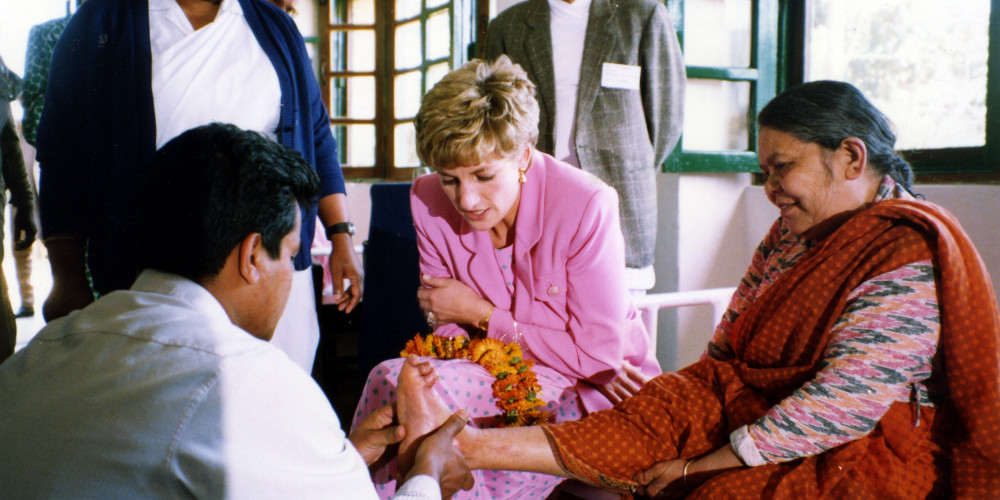 The “people’s princess” touched the hearts of many across the world…including people affected by leprosy. It is 25 years this month since the much beloved Diana, Princess of Wales died in tragic circumstances. Much has changed. The ability to find, treat, and heal people with leprosy has made remarkable progress. The goals of zero transmission, zero disability, and zero discrimination are possible because of your faithful prayers and kindness.

Princess Diana once said, “It has always been my concern to touch people with leprosy, trying to show in a simple action that they are not reviled, nor are we repulsed.” She matched her actions to her words and gave us a modern biblical example of compassionate love.

Janet Walmsley invites us to remember what tender-hearted influencers can do for the hope of individuals and the inspiration of nations.

Perhaps you will be inspired too…

In 1989 Diana, Princess of Wales visited a Leprosy Mission Hospital in Indonesia against the advice of officials and the press. She was filmed sitting with leprosy patients, talking to them

and – most controversially – touching them. A year later Diana became a patron of The Leprosy Mission (TLM), and in the following years she visited projects in India, Nepal and Zimbabwe.

When Diana visited The Leprosy Mission’s work at Anandaban Hospital in Kathmandu, Nepal in 1993, she sat on the patients’ beds, holding their hands and talking to them. When the pictures were broadcast around the globe, they absolutely shocked the world. It was against everyone’s advice, against protocol – to touch a person with leprosy.

Her visits at that time provided invaluable publicity for the work of TLM – giving a clear message that leprosy was not a disease from Bible times, something eradicated a long time ago, nor were leprosy patients “untouchables” – to be feared and outcast from society.

Ruth, a British worker with The Leprosy Mission in Nepal who had been there when Diana visited the Anandaban Hospital, shared with me some years later:

“There were two quite beautiful effects from Diana’s visit. One was on the patients, who were overwhelmed by her kindness – the way she sat on their beds, held their hands and talked to them. It was absolutely huge to hold a leprosy

patient’s hands at that time!

“The other effect was on the people who worked with leprosy patients. A colleague in PNG told me they received copies of that broadcast from Nepal and showed the health workers – it really challenged their attitudes. They realised that if the Princess could come that close to patients and not feel afraid or repulsed, then they had to think about their attitude to people with leprosy as well. It was very powerful.”

You can read the full article here… https://bit.ly/3AivURc

In Hannah Mudge’s article for TLM England and Wales, Country Leader Peter Waddup speaks passionately about the need for the same attitudes today.

He said: “Covid has had a completely devastating effect in the countries where we work. It is not only a case of health systems collapsing under the strain but lockdown measures imposed to curtail the spread of the virus causing widespread poverty.

“There is desperate hunger and it is widely reported that millions of people globally have been plunged into extreme poverty as a direct result of the pandemic.

“Leprosy is a leading cause of preventable disability and is a disease that thrives where people live in poverty. Princess Diana was a superb Patron of The Leprosy Mission.

“She was the world’s most photographed woman and made huge strides in quashing the age-old prejudice and myths surrounding leprosy which we know stop people coming forward for treatment.

“We need to remember the Princess’s legacy of kindness and acceptance by raising awareness of the disease so that people will recognise its early symptoms and seek treatment without fear of rejection from their family, friends and communities.

“This is even more paramount in the days of this terrible pandemic where government resources simply will not be there to find these people.”

Pray that more people affected by leprosy would experience healing through the compassion and love shown by people like Princess Diana, and people like you.

Your continued faithfulness in following Jesus and reaching out, touches the lives of those affected by leprosy. You can continue to show kindness in the work of Anandaban Hospital where Princess Diana visited through the

Nepal Self Care Unit by going to:

The Joy of gaining a leg. Your compassion and prayers give reason to celebrate.

The heartbreak of losing your leg. What would you do in Mr Singaravel’s place?