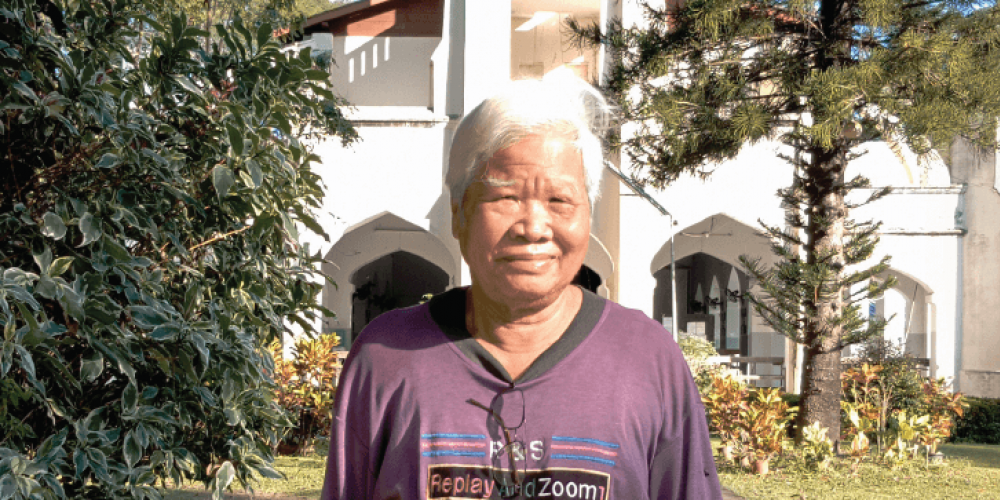 “When people asked about the story of my life I always say, ‘God made all the difference in my life’,” said Mr. Puu Padang, as we soaked up the warmth of the sun breaking through the early morning chill.

“I first came to McKean for leprosy treatment when I was 21. Out in society I always kept my hands in my pockets, afraid of the stigma I would experience when people saw my disabled hands. Although I got the right medicine and the disease was cured I still did not want to return to face people’s possible rejection. I got jobs looking after the chickens in McKean agricultural work. Then I moved on with work taking care of the cows. Whenever possible at night I got hold of alcohol from nearby shops, and slept wherever I passed out. I also got hold of small New Testaments which had been given to patients, and I read these again and again.

“One day a fellow patient who had trained as a pastor in McKean Bible School and was working as a pastor challenged me, ‘Are you ready to believe?’ I realised that I was. McKean chaplain mentored me in the faith, and I was baptised and became a member of the church. My life changed. I met and married a young widow and instantly became father to three very young children. I shared with them the songs and stories I was learning about the Lord Jesus. Now I love to talk about Him with everyone.

God changed me. I no longer thought or cared about my hands. I had confidence. I am a child of God. I was elected a deacon, and later an elder in my church, and our family was actively involved there. But I also became involved in taking my children and later grandchildren to school, mixing with other parents, being active in the Parent- Teacher association. I have been appointed my church representative at the National Assembly of the Thai churches also. I no longer avoided going into general society and was not ashamed of having had leprosy. I see it as God’s plan to change my life and bring me to Himself.

When we planned for the national meetings of the Association of People Affected by Leprosy I was elected by the northern Thai group to be their representative. We discussed what we wanted society to do for us: giving us equal opportunity and acceptance. But we also recognise that we have contributions to make to society too.

I happily tell everyone it is God who made all the difference to my life.”

Thank You, Lord that You are able to transform lives. Physically and spiritually, You rescue us. We worship You and delight in Your ways. Pray for the patients and staff at McKean hospital to experience God’s love this Easter.